Perhaps the death of Grievous set the tone for the day but I have a tremendous sense of a lack of achievement so hopefully writing this will focus my mind.

The kids went to Enda's today with Ant asking me what I planned to do with my day. I had no idea but there was a vague suggestion of organising something. After breakfast I spent time blog hopping but eventually aimed for the playroom, to cuddle Yoda and empty a shelf or two.

I did fill a bin bag and a box for the charity shop but I felt I had made more mess than when I started. I did manage to get my sewing stuff into one place, though not in any order. That will come later. The trouble was I was sorting out the shelves that had teaching stuff on it. Now, admittedly, some of it was very old and outdated but I still felt odd adding stuff to the discard pile. I felt I was resigning myself to a lack of identity. I have no problem with my role as mum but it feels strange to be ridding myself of the trappings of my profession. I don't know whether to keep what seems to be the most important files just in case I need them when/if I choose to teach again or be totally ruthless with myself and assume the NZ system has no need of British resources.

I also managed to get all our NZ documents in one place so that says something!

We took a group trip to see the Simpson movie. It was, as expected, just a longer episode with fewer jokes but the boys ( 8 year olds) loved it.

The rat had a very formal funeral service, once we had got over the trauma of trying to dig a hole big enough to take the box. Roots and rocks made life difficult. We said a few words over the 'site' and Caitlin left a flower to mark the spot.

I also put my wedding dress on eBay. There must be major psychological value in that.

So you see it seems that I have achieved somethings today just lots of little things. My mind seems to be in one of its wandering modes. If I don't focus, or if I try to handle jobs ( like the playroom) with lots of potential, I can get overwhelmed and meltdown. Making sure I only tidied the room for one hour and filled one bag of crap meant I had an end point. But I had to make myself stop. The Simpsons trip helped with that.
Posted by Jo Ashcroft at 7:26 PM No comments:

Is there a rodent heaven? 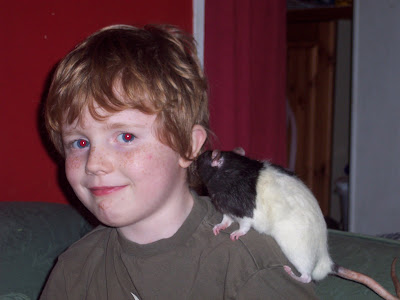 Sadly the news early today is of the death of Grievous the Rat. Following about a fortnight of laboured breathing, or possibly overfeeding, he was found lying in the bottom of the cage. At least he wasn't curled up in quite the same way as Lily. That means I can't rib Roo in the same way that I do Caitlin!
The funeral will be held this afternoon, followed by a brief wake ( of Toad in the Hole). I shall spend the day comforting Yoda, and tidying the playroom.
Posted by Jo Ashcroft at 9:52 AM No comments:

Jo Ashcroft
Parau, Waitakere, New Zealand
The number plate on my car reads 'BIPOLR', my house is full of embroidery thread, fabric and W.I.Ps (works in progress), generally completed cryptic crosswords and I tweet, facebook, google, blog and surf ( are they all official verbs now? Hmm just about sums me up that paragraph!Oh and I teach gifted kids once a week, mostly coz I was one... I was diagnosed with Manic Depression in 2004 after suffering from something for about 20 years.I am a mum first and foremost, then a teacher, then possibly a person! Oh and don't forget the crafter. That bit keeps me happy sane and safe! Crafting for health and well being!!!

Yet another Game of Thrones Book by George R R Martin-it's the white one- with Tyrion, JOn, Bran, Daenerys and Reek in it, not the boring other half one with Cersei and Jaime